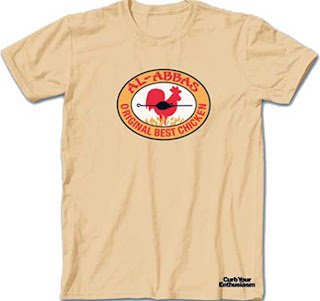 A recent episode of Larry David’s "Curb Your Enthusiasm" (Season 8, Episode 3), which for some reason was placed at an extremely late hour on RTE’s TG4 schedule, features an unusually blunt treatment of the Israeli-Palestinian issue, along with Larry’s unique brand of self-deprecating wit. Larry and his pal Jeff visit a "Palestinian chicken place" called "Al Abbas Original Best Chicken". It is noted for serving excellent chicken. The restaurant is believed to be broadly based on two Lebanese eateries in California. Interestingly David treats anti-Semitism as a given in the Palestinian movement.

Larry [admiring a waitress in Al-Abbas]: Looks like they are planning the next intifada at this table but look at this woman, could be the next Mrs. David. What do you think about that?
Jeff: If by some chance she's going to get over her anti-Semitism, odds are not with you!
Larry: Really?
Jeff: Just my gut feeling.
Larry: Know what it is? You’re always attracted to someone who doesn’t want you, right? Well here you have someone who not only doesn't want you, doesn't even acknowledge your right to exist, wants your destruction… That’s a turn-on.

Marty: Proud Jews wear Yarmulkes [skullcaps].
Larry: Be proud here in the parking lot, you don’t need to be proud in there [Al Abbas].

A similar post is found at The Iconoclast.
Posted by Rob Harris at 01:50 6 comments:
Email ThisBlogThis!Share to TwitterShare to FacebookShare to Pinterest
Labels: anti-Semitism, Curb your enthusiasm, Larry David

Anti-Israeli propaganda at the Irish Examiner 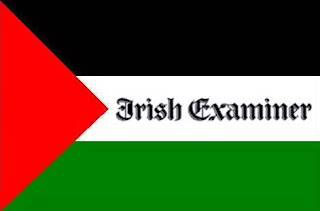 An Extremely biased article by the Irish Examiner appeared on Monday the 7th of November entitled "Gaza flotilla takeover ‘put lives at risk’". The article was by one Ann Cahill, their "Europe Correspondent". It gave free rein to the statements of dishonest anti-Israeli demagogues Fintan Lane and Paul Murphy, whilst failing to even briefly mention that the Irish consular assistance from the Embassy in Tel Aviv affirmed they were in good health. The Irish Examiner has been notably pro-Palestinian in its coverage for some time, and has crossed an ethical line, such as with active promotion of pro-Palestinian events. The article prompted Dermot Meleady to write a strongly worded email to Ms. Cahill on the day of publication:

Your article in Monday's Irish Examiner on the intercepted Gaza flotilla makes me wonder what has happened to journalistic standards.

There are several interesting aspects to this story, aspects in which the facts are contested. First, there is the question of aid. The organisers had said there would be $30,000 worth of aid on board the ships. Yet on the Israeli navy video, we can hear the activists say they have no cargo, and the Israelis say they found no aid (or weapons) on board when the ships docked at Ashdod. What is the truth? It's important to know, since we have Micheal Martin and other calling the flotilla a 'humanitarian aid' convoy, while the Israelis call it simply a provocation.

Second, there is the conflict between what the Irish consul said at Ashdod -- that all the activists were in good health -- and the allegations made by Messrs. Lane, Murphy et al that they were maltreated by the Israeli authorities. The suggestion by the activists that a water hose could start a fire on board the Saoirse might have been expected to generate some scepticism, but none was evident in the article.

Third, the incongruity of the activists claiming to have been 'kidnapped', yet resisting being sent home from a country they profess to hate might have incurred comment, but there was none.

Fourth, there is the conflict between the measured tone of Eamon Gilmore's statement about the safety of the Irish citizens on board and your presentation of this as 'condemnation'.

Fifth, you seem to accept at face value the claim of the activists that the flotilla's problems in making the journey to Gaza in July were the result of 'sabotage', despite an assertion to the contrary by the Turkish Government. Again, it would have been nice to have heard both sides reported at least. And surely it would have added to the enlightenment of readers to have been told that 7 of the 14 Irish activists are members of Sinn Fein including former members of the IRA -- i.e. hardly 'humanitarians' of unblemished record.

I thought it was a journalist's function to be curious, ask questions, try to find the truth. Instead the readers were served with a reprint of a propaganda release by the Palestinian Solidarity movement, with a little added gloss. If you are really a campaigner with a specific political agenda to push, and not a serious journalist willing to let readers make up their own minds based on the facts, perhaps in future you might preface your reports with this information for the benefit of readers?