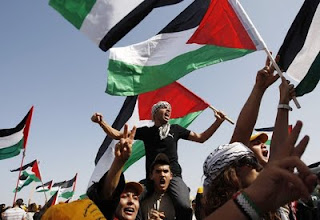 With The Palestinian Authority seeking UN recognition of a Palestinian state this month in New York, it is worth reflecting upon whether acceptance will be a move toward peace or would intensify conflict.

One critical factor, too often overlooked in the conflict, is the opinion of Arab-Palestinian people themselves. Two months ago high profile polster and leading US Democratic Party strategist, Stanley Greenberg, conducted a survey in conjunction with the Israel Project and the Palestinian Center for Public Opinion. The poll involved over 1,000 Palestinians living in the West Bank and Gaza.

Despite spin to the contrary, the Poll actually demonstrates that Palestinian extremism is as intensive as ever. It starkly illustrated that majority opinion amongst ordinary Palestinians on the extermination of the Jews is problematic. 73% of the Palestinians polled agree with Article Seven of Hamas’ Charter calling for the mass genocide of Jews.

… the Hamas has been looking forward to implement Allah’s promise whatever time it might take. The prophet, prayer and peace be upon him, said: The time will not come until Muslims will fight the Jews (and kill them); until the Jews hide behind rocks and trees, which will cry: O Muslim! there is a Jew hiding behind me, come on and kill him! This will not apply to the Gharqad, which is a Jewish tree.

The survey found that 61% of Palestinians reject the firmly established approach of a two-state solution to peace. Remarkably 92% said Jerusalem should solely be the capital of Palestine, with a mere 3% stating that the city should be the capital shared by both states. There were some positives with 83% saying that job creation should be a high priority of the Palestinian Authority. However, extremism was clearly the order of the day with no less than 62% asserting it was morally right to kidnap IDF soldiers.

Such sentiments will come as no surprise to many that appreciate the complexity of the Middle East, beyond the largely pro-Palestinian line taken by the mainstream international media, and the intensive campaigning which portrays Israel as the aggressor. Polls through the years have demonstrated that the great majority of Palestinians wouldn’t welcome peace. Similarly Hamas was elected in Gaza in 2006 on an explicit mandate of continuing conflict with Israel.

This extremism is linked with the common religious fervour displayed through much of the Islamic world, especially in the Middle East. For example, a Pew poll some months ago showed that 84% of Egyptians advocated death for leaving the Islamic faith, a remarkable view in what is supposedly one of the more moderate Islamic nations. There were similar results in Jordan (Palestine). To many Muslims Israel’s very existence is objectionable partly due to Dar al-Islam (House of Islam), a notion central to the faith.

This unique trait of Palestinian/Arabic culture is displayed all too clearly in disturbing material taken from Palestinian sources. Below are examples that demonstrate the religious dimension of the conflict.

A clip taken from The Palestinian Authority TV channel featuring Palestinians advocating the murder of Jews, very much redolent of the Hamas Charter.

A Friday Sermon at Gaza Mosque — “They are all liars, they are the ones who must be butchered and killed…”

Excerpts from a sermon delivered by Ahmad Bahr, acting speaker of the Palestinian Legislative Council, which aired on Sudan TV in 2007. “Oh Allah, Count their numbers, and kill them to the very last one… defeat the Jews and the Americans.

This sort of material is far from unknown. There is a large amount of similar content on the web. It is no secret that Palestinian incitement to hatred against Israel, and Jews generally, is a defining feature of their culture. It is commonly cited as a response to those doggedly supporting the Palestinians. And yet such genocidal hate mongering is continually ignored by the international media and world leaders.

A predominant feature of the pro-Palestinian movement in the last decade has been to advocate for a one-state solution where Muslim Palestinians will make a majority of the populace. This is not terribly far from the stance terrorist organisations like Hamas adopt in seeking a one-state solution involving the abolition of Israel as a Jewish state. It is clear that the pro-Palestinian movement including the BDS boycott campaign has done at least as much to delegitimise Israel as Hamas but in a shorter timeframe. It would seem that many Palestinians have learnt this lesson, which explains why only 45% said they subscribed to the Hamas charter’s statement that the only solution to the Palestinian problem is jihad.

Perhaps related is the finding that 65% of Palestinians preferred talks to violence. An article about the Poll by the Guardian highlighted that two-thirds of Palestinians favoured talking over violence. However, before celebrating the imminent possibility of peace, it must be noted that 66% stated that a two-state solution should only be an interim solution followed with a single Palestinian state, echoing Arafat’s dishonest “two-stage” approach to the peace process. Such views are clearly a recipe for further conflict rather than peace.

It is no coincidence that elsewhere in the media the poll was reported with a startlingly dishonest slant. Such coverage, which ignores the results suggesting extremism, is a reflection of broad media coverage, which shies away from negative portrayals of the Palestinians even if it makes for a better news story. It perpetuates the pro-Palestinian myth that Israel is exclusively to blame for a lack of peace. Coverage on pro-Palestinian websites also whitewashed the poll findings.

Interestingly Israel welcomed the statistic that demonstrated Palestinians preferred talks to violence which on the face of it is bizarre since the survey also found that 61% of Palestinians reject a two-state solution. It’s telling that they welcomed one statistical finding that only sounds positive when stripped of context perhaps because any faint suggestion Palestinian fantaticism may be on the decrease is welcome news.

During the same month that the Poll was taken, Nabil Shaath, one of the most senior politicians in the Palestinian Authority, asserted in an interview on the Lebanese ABN TV station that the PA will never accept a two-state solution to the Conflict:


The recognition of a [Palestinian] state is basically a bilateral action, which receives the blessing of the UN. This act, however, will make many things possible in the future. Eventually, we will be able to sign bilateral agreements with states, and this will enable us to exert pressure on Israel. […] The story of “two states for two peoples” means that there will be a Jewish people over there and a Palestinian people here. We will never accept this…

This is one of many examples of unguarded talk from the supposedly moderate Palestinian Authority as a cursory look at Palwatch and Memri will attest.
It is clear the vast Western support base for the Palestinian cause is in actual fact facilitating a continued state of strife, where no pressure whatsoever is brought to bear on the Palestinians to make any meaningful concessions for peace. The genocidal character of the incitement and the celebration of terrorism is excused, ignored, and often justified.

It can be concluded that neither the apparently moderate Palestinian leaders, nor most of the Palestinian people themselves, seek a meaningful peace with Israel, nor do many of their supporters. There is an ugly truth behind the findings of the Poll, and in the present situation where the prospect of peace is more distant than ever, the UN recognition of a Palestinian state would be an unmitigated disaster.