Another low point in the BDS Movement 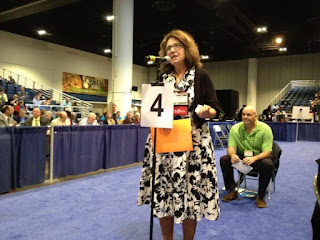 Delegates at the recent General Convention of the United Methodist Church (held from the 24th April to May 4th, 2012) approved a resolution calling for a boycott of Israeli goods made in the West Bank.

It was to be expected as the United Methodist Church has for some time expressed substantive hostility toward the Jewish State. There was a great deal of hand-wringing over the supposed harm being done to Palestinian Christians due to the “Occupation” but zero concern over the treatment of Palestinian Christians by the Palestinian Authority itself. Nor was there much worry expressed over the systematic cleansing of Christians from the Islamic Middle East, such as the ongoing oppression of Arab Christians in nearby Syria and Egypt, not to mention recent events in Southern Sudan, Mali, Nigeria…

During another anti-Israeli resolution that failed to pass, which sought the divestment of the Church’s stock in three multinational companies that do business with Israel, the sheer bigotry of one speech by a BDS campaigner stood out. The individual in question: One Margaret Novak of the two-man Yellow Stone delegation to the Conference.

Margaret Novak stated to the assembly, without any subsequent censure:

I would just ask us all to imagine we were United Methodists in the 1930s and 40s [and] that our Board of Pensions held stock in the very successful manufacturing firms in Germany that bid and received the bids to manufacture the ovens for the concentration camps.

At what point would we decide it was time to divest?

How much evidence would we ask for before it was time to stop the wholesale destruction of people?

Whilst the comparison of Israeli policies in a conflict zone to the destruction of Jews in the Holocaust is a common defamation of the Jewish State, which doesn’t remotely stand up to any sort of impartial analysis as the condition of the Palestinian populace in the West Bank improved considerably since the so-called “occupation” began in 1967, with their welfare comparing favourably with neighbouring countries, Ms. Novak went one stage further by comparing three modern multinational companies that dared to do business with Israel with the very firms that manufactured the ovens used during the extermination programme known as the Holocaust.

What are these diabolically evil companies from which Ms. Novak sought divestment? Step forward Caterpillar, Hewlett Packard and Motorola! Ye ebil be responsible for the slaughter of the Palestinians!

It would be an exaggeration to describe Ms. Novak’s assertion as a new nadir in the BDS Movement since activists for that very cause routinely engage in blood libel, for example the aggressive year-long protests in Australia against a Jewish-Israeli chocolatier that featured the signature chant “There’s blood in your hot chocolate”.

Nonetheless, such a statement of moral equivalence represents an interesting insight into the extreme moral depravity of those involved in BDS campaigning, their extremist stances, and frequent attacks on any sort of positive collaboration between Israeli’s and Palestinians. In totality it points to the fact that BDS campaigners do not seek a just solution to the conflict but rather wish to perpetuate it until Israel’s destruction.

Ms. Novak played the BDS Movement’s signature tune that slanders Israel with Holocaust imagery. It is a rather ironic thing to do. Despite their claims that BDS(M) is based on the boycott of Apartheid South Africa, it actually has its origins in the anti-Semitic Arab economic boycott of Israel, which was initiated several years before the Jewish State was born, mere months after the atrocities of the Holocaust were revealed to the world.

The policy of the Arab League was based on an older Arab boycott of Jewish businesses, which started circa 1920. In various guises it became a critical element in achieving within a few decades an effective Judenrein of the Middle East. Interestingly, similar boycotts were instituted in other parts of the world at the same time, not merely the Judenboykott of 1930’s Nazi Germany. These boycotts were driven by nothing other than naked unabashed anti-Semitism. Today same the strategy is ennobled with a fashionable humanitarianism but the behaviour of those involved reveals its true intent.

I thought it was important to note Ms. Novak's status in the United Methodist Church as it further indicates her extreme opinions are representative of elements within the institution. David Fischler, a Presbyterian Church pastor noted in the comments section of this article:


...this woman isn't just some run-of-the-mill kook. She has been on the United Methodist Commission on Communications for years, been vice president, and is one of the most important laypeople in her annual conference and the Western Jurisdiction. When she spoke, lots of people knew her as a leading UM layperson, and not just a nut who got elected to GC because nobody else was willing to go (she was, in fact, the only lay delegate from Yellowstone AC).

Excellent post Rob. I hadn't realized that a motion approving a boycott of the settlements had passed because I read in the JTA that the divestment motion (from the 3 companies) had failed. I didn't notice in the JTA article any other boycott motion, though it is there. I simply missed it.

The BDS movement are disgusting, biased, racist and antisemitic. Yet I think they are more bark than bite. They are a constant annoyance but I think they make so much noise to make up for their lack of effectiveness.

In any case, kol hakavod on your post. We cannot let them get away with their smears.

Thanks for the positive feedback Anne. Yeah the divestment motion failed perhaps because it required action by a senior element in the Church but the other motions passed so its mixed news in all.

I agree with your assessment of the BDS movement. My concern is that the BDS will become gradually more and more accepted because they have their "human rights" jive pretty much down to a tee.

Thanks, and a kol hakavod to you for the tireless work you do on your blog too! :)