Bomb alert at the Israeli Embassy to Ireland 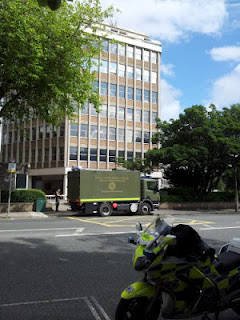 The Israeli Embassy, situated in Dublin, was hit by a hoaxed bomb alert yesterday, which led to the Irish Army’s bomb disposal squad attending the scene. It may have links with three additional bomb alerts during the same day, in residential areas of the country. One of these alerts was also a hoax, and the other two featured viable devices or bomb components.


There have been very frequent reports in the Irish media concerning the appearance of (presumably primitive) explosive devices in recent years. The source(s) of these devices remains unclear as the media reports are notably vague. It may be non-political criminal gangs and/or Irish republican groups, which in Ireland are typically of a hard-leftist political persuasion.

Until now the Israeli Embassy appears not to have been a target of these incidents, although it has been the target of bomb/chemical hoaxes in the past.

The Israeli Embassy is subject to weekly pro-Palestinian demonstrations, and continuous demands to have the Ambassador expelled. Attempts in recent years to control or take the Embassy over have also been made by left-wing politicians and activists, such as Richard Boyd-Barrett.