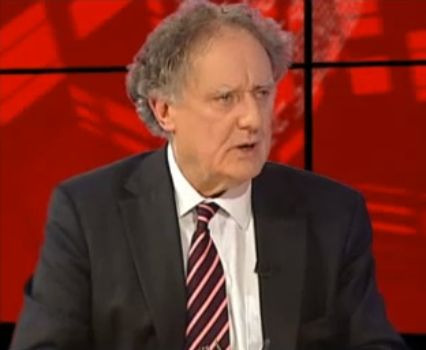 Controversy erupted when firebrand left-wing Irish broadcaster Vincent Browne referred to Israel as a “cancer” on the 23rd October, during his popular TV programme Tonight with Vincent Browne (TV3).

When discussing the final US presidential debate between Obama and Romney, Browne was critical of what he saw as a failure to discuss American support for Israel. In an outspoken fashion, he stated:

Israel is the cancer in foreign affairs. It polarises the Islamic community of the world against the rest of the world…. It’s a massive injustice. They [the Jews] stole the land from the Arabs.


Browne later defended his remarks which he justified by using an extremely dubious historical argument:

The reality is the Israeli State was founded by confiscation of land previously occupied by Arabs. That injustice is at the centre of the conflict.

Actually the conflict is founded on the fact that Israel is located in what Muslims refer to as “Dar al-Islam” — hence its very existence (pre or post 1967 borders) is an offence. Furthermore, his assertion is a gross oversimplification as most Jewish habitation was placed on Miri or public land and waste land as defined in Article Six of the British Mandate, and legally purchased land. Brown went on to state that the word “cancer” was ill chosen:

I didn’t mean it [Israel] should be eliminated. It was an infelicitous use of the word.

Browne’s insistence that he does not wish to see Israel “eliminated” can be doubted with good reason. The problem with his explanation is that he appeals to the historic founding of Israel in his subsequent explanation, and seemingly in his initial criticism as well. Thus, his stance stands in stark contrast to common criticism of Israel for it being located on its June 1967 borders, a consequence of the Six-Day War, in which they took possession, during a defensive conflict, of the Sinai, West Bank, and the Gaza Strip. Therefore, it would seem Browne takes issue with Israel’s presence even in its pre-1967 form.

Notwithstanding the point above, was use of the word “cancer” ill-chosen or in keeping with Browne’s previously expressed views? Arguably it is the latter for his prejudice against Israel is very well known.

For example, Browne can quite often be heard on his show expressing the belief that Israel is simply filled with European Jews colonising the land. That point is illustrative of Browne’s ignorance of Israel’s history because much of the Jewish populace within Israel today is descended from Jews that were persecuted and expelled from Arab lands. Moreover, the principles upon which the Jewish State was founded, the need for a haven for the Jewish People, is both a moral right in itself and a necessity following persecution for in excess of a millennia in both the Islamic and Christian worlds. The Jewish People qualify as a displaced indigenous group but Browne’s casual and contemptuous assertions also by inference amount to a denial of their historic roots, and their moral right to return to their homeland.

Browne’s issue with Israel and the West, and a corresponding support for Islamism, is a long standing one. In the aftermath of the 2010 Gaza Flotilla he described the terrorism emanating from Gaza as little more than stone throwing. To quote an article by David Quinn some years ago:

In The Irish Times the other day we had Vincent Browne calling for the West to give into virtually all of the demands of al-Qa’ida, Hamas, Hizbollah, the Iranians, and I suppose the Taliban as well. He imagines that if America pulled the plug on the Saudi royal family… and if the West generally stops interfering in the affairs of Muslims countries, then all will be well… If all these things happen, Muslim rage would continue to burn because Browne, like the left in general, misdiagnoses the real cause of that rage.

Thus, it would seem Browne’s use of the word “cancer” conforms closely with his views on the Middle East. His views are extreme to say the least, and the fact that he is happy to express them in a show that ought to be impartial on complex issues suggests he is ill suited for a popular slot on the Irish airwaves.

Little wonder Enda Kenny, the highest ranking Irish politician at present, has consistently refused to accept Browne’s invitations for interview. Sadly however, his firebrand style of leftist posturing has become popular in a nation struggling at an individual and collective level with severe banking debt.

Many did not view his reply to the criticism favourably. Regarding the fashion in which he addressed the comments in a subsequent show:

He didn’t apologise… He also behaved like a typical bully and said he was being blackmailed.

So to sum up, horrid pro-Israeli’s and Israeli-Jews (presumably) have blackmailed poor Mr. Browne by criticising him for word use that is more appropriately found in the vocabulary of a hate-filled Iranian ayatollah than an experienced political journalist with decades of experience in the industry.

It was announced this week that the Broadcasting Authority of Ireland (BAI) upheld some complaints by viewers concerning Vincent Browne’s anti-Israeli comments. The BAI said that the item in the show carrying Browne’s remarks "failed to meet the requirement for fair, objective and impartial treatment of news and current affairs". They disagreed that the remarks constituted anti-Semitism but added that the comments about Israel were made without apparent relevance to the discussion at hand.

TV3 will be forced to issue an apology on Television for Browne’s remarks, leading Brendan O'Connor to quip during his monologue on the popular Saturday Night Live (RTE) TV show: "TV3 is to apologise to Israel for Vincent Browne. That’s all very well but when are they going to apologise to the rest of us?"

Didn't the Arabs steal the land from the Berbers, Copts, Jews, Kurds etc first? I'm suprised that still in the 21st century they still discuss something that happened in 1948.Imagine if all European countries refused to settle their displaced which was most likely 30,000,000+.Then there's several other issues that also happened such as the partition of India.

The I/P Conflict is actually quite minor on an international scale and it certainly isn't the only conflict which infuriates the Muslim world.There's the Kashmir, the Sunni-Shia divide and what Boko Haram is doing in Nigeria.

Indeed the Arabs pushed out a goodly number of people in the past, and it would seem that there is still a level of racial supremicism within Arab-Islamic culture. For example, there has been reports of systemic violence against black people in Libya http://www.huffingtonpost.com/rebecca-tinsley/arab-racism_b_951422.html and the butchery against black people in Sudan, be they Muslim or Christian, is clearly motivated by racism but its not PC to discuss!

Good point, and with the partition of India estimates of somewhere from 12 to 15+ million make Israel-Palestine look like small fry. Huge numbers have been displaced but just one zone relates to Jews and with it vast numbers of people go totally crazy while bigger issues are ignored. I’m not saying all pro-Palestinians are anti-Semitic. that would be unfair but there has to be an underlying core issue of anti-Semitism in the movement itself. I simply cannot find any other satisfactory explanation as to why the rest of the world is so vitriolic about Jewish self-determination.

Unfortunately the whole discussion about 1948/49 underlines the fact that many simply don’t recognise Israel’s right to exist in any form. That is clear in the way which Vincent Browne framed his points, even if he didn’t come right out and say Israel shouldn’t exist - something he (and other Israeli-bashers) aren’t stupid enough to do. Browne has since invited Ambassador Modai’s wife on the show after she said it was an anti-Semitic remark – perhaps seeing in Browne’s point the same inference. It would be a bad idea considering the appalling way he treats guests he dislikes.

The issue of Arab racism does remain a taboo subject. There was apparently several cases of Arab Libyans locking Blacker Libyans into cages in zoos and shoving old regime flags down their throats after the fall of Gaddafi. I also forgot to mention what was happening in Sudan.

The underlying cause most likely has to be that the backward and unenlightened Arab World is sitting on billions of tonnes of oil. Every other problem in the world to the left is secondary or irrelevant.

Exactly! How can Israel begin negotiating on pre 1967 borders when those who propose such a thing won't even accept Israel's legitimacy in the first place? Anti-Semitism is now permitted provided one mixes it up with accusations of Anti-Zionism.

Wow, I didn’t know they actually locked blacks in zoo cages in Libya. Yeah I think your suspicions are correct about avoiding upsetting the Arab world but I think it also has to do with a cultural zeitgeist where anything American or Western is to blame for the world’s ills, e.g. mention what’s going on with Iran and someone will often retort that the West installed the Shah as if that’s some sort of excuse.


Yeah, Sudan where the there has been the greatest level of genocidal white on black violence in many decades, for after all Arabs are a Caucasoid race but you will be hard pressed to find much Western outrage about it! In fact a UN fact checking team which shared some of the same members that made up the Goldstone charade (one of the four members of the “investigative” team one and one of the three members of the implementation team) found that there was no genocide in Darfur. Jimmy “Dhimmi” Carter even gave out to the US government for using the term! It would be funny if it wasn’t so grave.