Knesset speaker visits Ireland: “It is legitimate to criticise us but first you must know the facts” 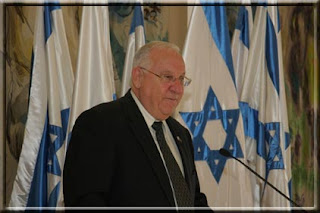 Reuven Rivlin, a member of Likud, and the speaker of Israel’s unicameral parliament, has begun an official visit to Ireland today at the invitation of his Irish counterpart, Sean Barrett, the speaker of Dáil Eireann, who Mr. Rivlin had previously hosted in Israel. The visit is bound to cause controversy.

Ireland and Israel have had a less than harmonious relationship over the years so the significance of Mr. Rivlin’s visit has been highlighted by Israeli officials, noting that high-level bilateral contact between Ireland and Israel are relatively rare. The visit was upgraded in terms of status, and he is being hosted in the official guesthouse where British Monarch Queen Elizabeth II, and United States President Barack Obama, stayed last year.

Mr Rivlin will meet recently elected Irish President Michael D. Higgins. The meeting may be a frosty one since Mr. Higgins is avowedly anti-Israel, going as far as to speak forcefully in defence of Hamas and some four years ago was to stand on the same platform as Ibrahim Mousawi, then head of Hizbullah’s notoriously anti-Semitic “Al Manar TV”. The significance of the meeting is purely diplomatic as role of President is largely a ceremonial affair.

Perhaps more significantly Mr. Rivlin will also meet Eamon Gilmore, Ireland’s Minister for Foreign Affairs, Tanaiste (second to the Taoiseach or prime-minister), and the leader of the Labour Party. Mr. Gilmore is also due to visit Israel next week. Mr. Gilmore, has also been strongly critical of Israel but his stance does not appear to be as one-sided as some, for example he visited the Israeli film festival last November that was subjected to an ugly intimidation campaign by the PSC.

Mr. Rivlin will also attend sessions of the Dáil and the Seannad (the respective lower and upper houses of Parliament). His presence is bound to generate a good deal of hostility given the powerful and highly vocal pro-Palestinian contingent in both chambers, which most recently caused a lot of noise over the detention of Irish citizens sailing on the Gaza flotilla late last year, even though no serious harm came to any of them during capture by Israeli forces or through the subsequent days of detention in Israel.

Hard-left Dail TDs from the United Left Alliance were especially critical. Joe Higgins, Socialist Party leader, was particularly aggressive in one speech where he lambasted Eamon Gilmore repeatedly for apparently not doing enough, asserted that Israel had “humiliated” Ireland, whilst repeatedly demanding the expulsion of the Israeli Ambassador. This was an extremist stance to adopt since it was widely reported at the time that impartial members of the Irish Embassy in Tel Aviv had met the “activists” each day, and affirmed they were being treated well.

There was uproar in the Seannad for several days during the detention of the members of the flotilla. The hysterical attitude of some senators could be fairly described as comical. Terry Leyden, leader of the pro-Palestinian parliamentary group, demanded that Eamon Gilmore fly to Israel in the government jet to bring the fourteen on board the flotilla home. Senator Tom Sheahan appeared to call for military intervention by the EU and UN against Israel! Thus it won’t be an easy visit for Mr. Rivlin.

“Until both peoples come to the realisation that peace is a mutual interest, there will be no peace”
The reception may be particularly unwelcome because Mr. Rivlin is broadly considered to be a right wing politician. He is a member of the dreaded “Likud”, currently the largest party in a government coalition, and oft described as hawkish in the media. He criticised Sharon’s decision to withdraw from Gaza in 2005, which was an appropriate move in the absence of a peace agreement. Mr. Rivlin spoke to the Irish Times ahead of his visit, giving some insight into his opposition toward concessions on Jewish settlement prior to talks:


First of all you need agreement between the two peoples, not just between the two governments. This would mean that the other side recognises Israel as a fact. Unfortunately, there is a rejection from the Palestinian side, or should I say from the Islamic side, to accept this. The Knesset endorsed the Oslo peace accords and even prime minister Netanyahu accepted the two-state solution. But, from the other side, there is no acceptance of Israel as a Jewish state, and that by creating two states we would be bringing an end to the conflict. Until both peoples come to the realisation that peace is a mutual interest, there will be no peace. Only when the Palestinians accept Israel as a Jewish state will we have peace.

One of the great problems in the international community is the abject failure to confront the extensive intolerance commonly displayed toward the Jewish State by the Palestinian side, whether it be Hamas, Hizbullah or even the supposedly moderate Fatah/PLO. However, Mr. Rivlin’s view on reconciliation between peoples, and the acknowledgement of differing needs was also a valuable lesson during the Northern Irish peace process. It may be one aspect the Irish officials will come to appreciate.

Importantly, he affirmed the need for a principally Jewish state, which is particularly relevant at a time of increasing intolerance world-wide, whilst also affirming the need for both peoples to live together:


We are destined to live together. We have to have a state that remains a safe haven for Jews worldwide, with a law of return permitting Jews to immigrate.

When asked “What do you hope to achieve from your trip to Ireland?”, Mr. Rivlin replied:


I have always admired the Irish people and we have a lot in common. Both our nations fought against imperialism for the right to self-determination. I know there is widespread support in Ireland for the Palestinian cause. We would like the Irish to understand that among friends we can agree to disagree. It is legitimate to criticise us but first you must know the facts. They must understand that if a future Palestinian state could threaten the very existence of the state of Israel then we must tread very carefully.

The response denotes acknowledgement that Ireland is one of the most pro-Palestinian nations in the West. It seems probable that the objectives of the visit will be quite modest. Mr. Rivlin strikes a careful balance between acknowledging that criticism of Israel is legitimate in itself but implies that the sort of black-and-white pro-Palestinian advocacy which only blames Israel, whilst excusing or completely ignoring the threats Israel faces, is unjust. This seems to be the message he will push during the visit.