The Visit of a Hamas leader to Tunisia, the Arab Spring, and crass pro-Palestinian apologism

When Ismail Haniyeh, Hamas’ leader in the Gaza Strip, visited Tunisia on January the 5th 2012, for a five-day visit, he was met with an ecstatic welcome from both the Tunisian public and authorities alike. To a significant extent the visit represented a chilling foresight of future conditions in the Middle East. 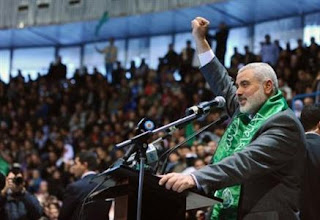 Ismail Haniya raises his fist as he speaks in front of supporters of the Tunisian islamist Ennahdha Party on January 8, 2012 in Tunis. (AFP)
Hamas: “We will Never Ever Recognise Israel”
Upon Haniyeh’s arrival at the airport in Tunis, frenzied crowd scenes ensued, featuring call and response chanting: “Killing the Jews…is a duty, Crushing the Jews…is a duty.” It was truly the sort of perverse welcome befitting a senior terrorist, in a region where such killers are worshipped as heroes.

Al-Aqsa TV, Hamas’ channel in Gaza, broadcast similarly charming material involving Haniyeh himself, such as a friendly chant with Tunisian officials seemingly for the cameras. One highlight of the chant included death-cultish ladder of skulls imagery:

Haniya delivered a number of speeches which displayed an apocalyptic vision that would impress fans of the Medieval gothic aesthetic, such as: “Dark days await you O Israel” and “Your honor is the honor of Palestine — Palestine from the [Mediterranean] Sea to the [Jordan] River.” The latter is a by now de rigueur statement at every pro-Palestinian event, an expressed wish for the total annihilation of Israel.

The religious significance of the conflict for Hamas was also evident in Haniya’s words:


The land of Palestine, oh brothers and sisters, is an Islamic waqf, as decreed by the second caliph, Omar ibn Al-Khattab [lived circa 586 to 644, a companion to Muhammad, later a ruler of the then rapidly expanding Islamic empire]. We shall not relinquish the Islamic waqf on the land of Palestine, and Jerusalem shall not be divided into Western and Eastern Jerusalem.

Perhaps the most telling feature of Haniya’s visit was that he clearly appears to believe that the Arab Spring will usher in a new era of even more intensive hostility and conflict directed at Israel. Notably, this is a vision that many Tunisians evidently share. To quote one of the few international news reports illustrating the jubilation at one event of the visit:

The prime minister in the Hamas-ruled Gaza Strip on Sunday promised “difficult days” for Israel, and at a rally in Tunis urged Arab Spring revolutionaries to fight for an independent Palestine. Ismail Haniya received an ovation from the crowd of some 5,000 men, women and children gathered in a stadium…
“Israel no longer has allies in Egypt and in Tunisia, we are saying to the Zionist enemies that times have changed and that the time of the Arab Spring, the time of the revolution, of dignity and of pride has arrived,” he said to loud cheers.
“We promise you that we will not cede a single part of Palestine, we will not cede Jerusalem, we will continue to fight and we will not lay down our arms,” he said. He urged “the people of the revolution to fight the army of Al-Quds” as Jerusalem is known in Arabic.
Haniya insisted “We will not recognise Israel”, as the crowd chanted: “Death to Israel”, “The Tunisian revolution supports Palestine”, and “The army of Mohammed is back”.
Some wiped their feet on the Star of David. 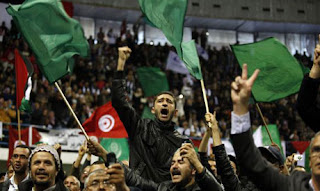 Supporters of the Islamist Ennahda movement during a meeting with Ismail Haniyeh in Tunis (Reuters)
The grotesque pro-Palestinian apologism for Hamas
Haniyeh’s words are further proof that Hamas has absolutely no desire to abandon its intent of destroying Israel through conflict. That in itself is nothing new as inciting against Israel is very much a defining feature of Hamas and their charter which clearly advocates genocide: “The prophet, prayer and peace be upon him, said: The time will not come until Muslims will fight the Jews (and kill them); until the Jews hide behind rocks and trees…”

Astonishingly however, a very substantial contingent of pro-Palestinians blithely deny or whitewash Hamas’ debased acts and its character. As with the nuclear threat from Iran, such people pretend that Israel does not face any medium/long-term risks to its existence from Hamas. This is because Israel’s utter demonisation, which they evidently seek, is incompatible with any concession that it faces danger.

US ex-president Jimmy Carter is one such advocate. Carter has repeatedly asserted that Hamas would accept a two-state solution. For example, Carter went to the West Bank in 2008, and claimed that they would recognise Israel. However, that assertion was soon denounced by Hamas’ senior official in Damascus, one Khaled Meshaal. It turned out that Carter’s assertion that Hamas would accept a two-state solution was actually just part of a two-stage solution as asserted repeatedly by senior Hamas officials. One could (with charity) call it wishful thinking on Carter’s part.

Whether through malice or an extraordinary naivete, such people assert that Hamas is actually quite a reasonable organisation that the “Zionist Lobby” (TM) demonised. They claim Hamas is the legitimate (democratically elected) representatives of Gaza rather than a group that threw dissenters off the top of tall buildings during a nasty coup. Hamas’ creeping legitimisation has led other anti-Israeli politicians to demand that Hamas be included in the peace process. Two examples are Ireland’s newly elected President, Michael D. Higgins, who demanded Hamas be taken off Europe’s proscribed organisations list, and Norway’s FM Jonas Gahr Stoere. However, the speeches in Tunisia, as elsewhere, demonstrate that this is a religious conflict, where absolute Islamic supremacy is the long-term aim. This should be blindingly obvious since Muslims the world over take issue with Israel’s very existence.

The statements in Tunisia were in keeping with other recent remarks by Ismail Haniyeh at a ceremony celebrating Hamas’ 24th anniversary. It was asserted they may seek an “interim objective of liberation of Gaza, the West Bank, or Jerusalem,” but an “interim objective” is merely that. It would not change Hamas’ long-term goal of liquidating Israel:


We won’t relinquish one inch of the land of Palestine… [Hamas will] lead Intifada after Intifada until we liberate Palestine — all of Palestine, Allah willing. Allah Akbar…

Such sentiments seem clear enough but just two days later, Mahmoud Abbas, the President of the Palestinian Authority, asserted that Hamas’ Khaled Mashaal had agreed to end military resistance, and accept a permanent solution based on the 1949 Armistice Lines (prior to Israel’s gains in the 1967 Six-Day War). As per usual, Abbas was taken at his word, and the statement was used by the media (Haaretz et al) to blast Israel for dragging its feet. However, as journalist Khaled Abu Toameh points out, Mashaal’s declarations only appeared in Western media outlets! Mashaal’s Arabic statements published in Palestinian media outlets didn’t mention accepting a two-state solution, ending violence or recognising the 1949 borders permanently.
Fallout from the Arab Spring
Hamas was loosing popularity especially in the aftermath of the 2009 Gaza war. However, 2011 became highly fortuitous for the group. Firstly, they received a much needed boost when the selective and highly misleading leaks, typically referred to as the “Palestine Papers”, portrayed Fatah as weaklings when negotiating with Israel in 2008. The leaks gravely damaged their credibility. Secondly, the optimistically titled “Arab Spring” threw off the relatively moderate secular chains that impeded Hamas’ spiritual forefathers, the Muslim Brotherhood, from gaining power in Egypt, and elsewhere.

Hamas asserted that the visit demonstrated that the organisation has achieved a great level of international recognition although the sharp transformation in the Arab world is also partly behind their rising acceptance. Haniya’s considerable Tunisian welcome was at the invitation of the new Islamist authorities, and he also visited Egypt and Sudan.

Notably Haniya’s visit didn’t please the Palestinian Authority, which claimed invitations should have gone through official diplomatic lines. It would appear that the more secular Fatah party, which leads the PA, will be increasingly sidelined by the Islamist leadership in Tunisia and Egypt, whilst the Muslim Brotherhood looks set to take Syria as well. Haniya’s invite to Tunisia can be seen as another sign that a sharp re-alignment is taking place in the Middle East, where it appears that Islamic extremists will bring about a new chapter in the Israeli-Palestinian conflict.

'However, the speeches in Tunisia, as elsewhere, demonstrate that this is a religious conflict, where absolute Islamic supremacy is the long-term aim. This should be blindingly obvious since Muslims the world over take issue with Israel’s very existence.'

And that Rob is (and should be for all sensible people so exclude the left etc) the nub of the issue.

Indeed Paul, unfortunately Israel is located in part of Dar al-Islam so Muslims the world over just can't abide the place. It may not be a picnic for us unfortunate lot located in Dar al-Harb (the House of War) either! We may be getting a flea in the ear with the likes of Ama Dinna-jacket talking about the return of the Twelfth Iman!